My thoughts used to be a penny… 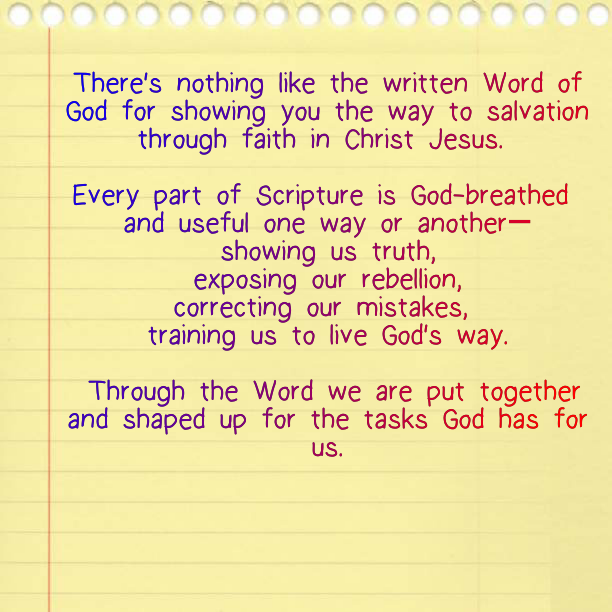 Now the Lord is the Spirit, and where the Spirit of the Lord is, there is freedom.  And we all, with unveiled face, beholding the glory of the Lord, are being transformed into the same image from one degree of glory to another. For this comes from the Lord who is the Spirit. ~ 2 Corinthians 3:17-18 (ESV)

God is spirit, and those who worship him must worship in spirit and truth.  ~John 4:24 ESV

As I read today’s verses, John 4:24 came to mind. God is spirit, and those who worship him must worship in spirit and truth. These were Jesus’ words to the woman at the well. It seems to imply one-more evidence of how inter-related and cross-related are the persons of the Triune God. The idea or concept of spirit encompasses all of God.

Of course in 2 Cor. 3:17 Paul affirms “the Lord is the Spirit” less we misunderstand that any one of the persons of the Trinity somehow falls short of actually being GOD. And I love what Paul is telling me in the balance of this verse. As I behold the glory of the Lord, I am being transformed into His image…one degree of glory at a time. This transformation is attributed to the work of the Holy Spirit.

When Moses asked God to “show me your glory” God had him hide in the cleft of the rock and God himself shielded Moses with his hand, lest Moses would be killed. Now I can stand beholding God’s glory and allowing the Spirit to do His work without fear. In fact with anticipation!

So today, let me be as bold as Moses. “Lord, show me your glory.”

“And I am sure of this, that he who began a good work in you will bring it to completion at the day of Jesus Christ.” Philippians 1:6

Holy, holy, holy, Lord God Almighty who was and is and is to come. Rev. 4

“I believe in the Spirit who is holy.” That’s the title and I do. I believe the Spirit is holy because the Spirit is God – equally God with the Father and the Son – who are also holy. In fact, holy basically means “set apart; separate – other”. The person of God who invades our space when we first believe is not a new version of us. He is a separate entity with an extraordinary difference – He is God our creator; we are the created.

And so the Holy Spirit (distinct from us) comes to reside within us – to live with us in the day to day of our lives. He is the closest God will ever be to you and me until we cross into eternity. His very presence does something for us – now we are “set apart” too.

“Set apart” to be the operatives in God entire plan of redemption.

Long ago, at many times and in many ways, God spoke to our fathers by the prophets, 2 but in these last days he has spoken to us by his Son, whom he appointed the heir of all things, through whom also he created the world. 3 He is the radiance of the glory of God and the exact imprint of his nature, and he upholds the universe by the word of his power. After making purification for sins, he sat down at the right hand of the Majesty on high, 4 having become as much superior to angels as the name he has inherited is more excellent than theirs. Heb. 1:1-4

In the long history of God interacting with his people, the writer of Hebrews tells us “but in these last days he has spoken to us by his Son”. As if to say all of that was one thing but now this is the new and better way for God to relate to us. He has given us his Son – an incarnation of God in the flesh of a human being. We have seen him, touched him, heard him and watched him live out this God life before our eyes. He is the perfect example. But, lest we think that he might just be a man God has sent as a prototype for humans, the writer is forceful in his description of him: heir of all things, creator of the world, the radiance of God’s glory and exact imprint of his nature. In other words God himself has dwelled among us.

Jesus – was a man in time but God for eternity. The One “who is, who was and who is to come”.

It is mind blowing for God to want to communicate with mankind at such a personal level. It is an interesting thought for him to send “some human droid” or “subordinate angel” to make contact with us. That would be the science fiction approach. The All Powerful would never leave the throne – the divide must be maintained for all to comprehend that God is not man, nor could he entertain them directly.

Wonderfully, that is not the nature of our God. He has no need to protect his position or his uniqueness. He relates to His creation directly, personally and lovingly because that is his heart on the matter. His plan is not to maintain a separation but to abolish it. He swings open the door to invite us home.

I think I’ll chew on that awhile.

Yesterday my husband dropped a plate he was planning to take to work on the cement garage floor.  It shattered and pieces, large and small, went everywhere. The slivers were menacing and the shards were razor sharp. There was no way they were going back together and I wasn’t willing to tackle the care needed to even try. I swept them into the dust pan and carefully dumped them into the trash.

So, this morning I’m thinking about broken things.  Broken relationships, broken hearts, broken bodies, broken psyches.  Every one is painful.  The jagged edges are both threatening and in need of tendercare mending.  I am inclined toward just thinking they cannot be re-gathered. They will never be mended.  The pieces are too far flung and no longer match-up.  They will forever be hurtful scars.

Then the Lord reminded me of the table top my artistic adult children made for me.  A bunch of broken tiles — re-shaped, re-designed, recovered – re-purposed.

It stuck me – with Jesus, nothing is lost, no brokenness cannot be healed.

If this is true, then God is pretty amazing! He is the only true God because He created everything both visible and invisible. He exists in a form (trinity) that is foreign to humankind’s understanding. But He calls us to be like Him. The only way I can see to do that is to live in community. With all its peril and fragility and potential for pain we are asked to make our goal to live as one body. Surely He knows the brokenness of our members but just maybe it is this community that heals us. He can be trusted because He is a good Father – with patience and care and love, collecting each child back to the safety and wholeness of His family and Himself.

The Spirit bears witness to our spirits and reminds us over and over…this is true.

The Spirit that we have makes us God’s chosen children. And with that Spirit we cry out, “Abba, Father.” Romans 8:1 ERV

When we receive Christ our destiny is sealed by the gift of the Holy Spirit who comes to dwell/abide in us. The Spirit is the down payment on God’s promise of all our relationship with Him has to offer. God himself – the Holy Spirit has not only chosen us but He gives us Himself as proof of His commitment to us.

At times I might doubt my son ship. Is this too good to be true? But the Spirit reminds me. I know it is Him because the thought would never come into my mind otherwise. Moreover, I would never have the audacity to consider myself God’s child apart from the voice of the Spirit that rises up, calling God “Father”.   It is all a mystery but true to my experience because God himself has chosen me and chosen to personally assure me I am His.

It has been my experience that one person of the Godhead has been more, what? meaningful maybe?, to me at different times in my life. I have not ever struggled with the concept of the Trinity but I definitely think I am currently being challenged in a different way to understand the Holy Spirit as a person. For me it is easy to visualize God as a Father or Jesus as a man to follow but the Holy Spirit has “no form” and frankly I have often considered Him more of a force or source of power. Unfortunately, while this is true, it limits the Holy Spirit to a lesser role in the Godhead and negates His personhood.

I am grateful for a tiny book I’ve been reading by B.B. Warfield (1851-1921) called simply The Holy Spirit. Each of the 9 chapters was a sermon concerning different aspects of the Holy Spirit. It is the 3rd chapter – The Love of the Holy Spirit – that has radically changed my thinking and my faith.

Sadly I can’t quote the entire chapter to explain the notion that has taken hold but it is one of the deep and unwavering assurance of the Holy Spirit whereby He would come to dwell – come and make His home within me. The relationship is a covenant one – unbreakable. I would say like marriage but it would not be the modern practice. This is the marriage WITHOUT an escape clause.

It is a powerful and awesome thing to consider the Holy Spirit’s indwelling and forever commitment to me purely on the basis of His love. A love that keeps wooing me to Himself, a love that never gives up or becomes frustrated, a love that endures until I am completely whole.

The Holy Spirit by Benjamin B. Warfield can be found in Kindle version on Amazon

“Our needs do not establish who God is – God has established who God is.” Shelly Giglio

There is much throughout the Bible that calls the members of His body to become one – in function, in equality, in mutual submission. This particular goal is a clear one. To ponder how the Godhead relates within Himself must be the key to understanding my own/our own way of living.

…that which we have seen and heard we proclaim also to you, so that you too may have fellowship with us; and indeed our fellowship is with the Father and with his Son Jesus Christ. And we are writing these things so that our joy may be complete.

I’ve never thought about how inclusive this statement is or how natural.

“I’m telling you what I’ve seen and heard so you can come too. You will never believe who I have become friends with… you’ve just got to get in on this! It is so great – unbelievable – really. I’m still in awe. You will simply love Jesus. And He will love you! I’ve told him all about you, He can hardly wait! Me too! I can hardly wait.  Okay, I’ll take a breath. 🙂 ”